Hank Jones, pianist and jazz legend, beloved husband of Theodosia, dear uncle to his nieces and nephews across the country, friend to music, inspiration to countless musicians, died May 16, 2010 in New York City, after a brief illness. He was 91 years old, and would have been 92 on July 31st.

Jones' longtime manager and Justin Time Records representative Jean-Pierre Leduc reflects "Today we celebrate his spirit, his gift, his joy, his wisdom and his friendship. Hank lived and breathed music, and was never far from a keyboard, even at the end. His incredible burst of productivity these last few years - concerts, recordings, fundraisers, clinics - was unprecedented and truly remarkable."

Born in 1918 in Vicksburg, Mississippi, Hank Jones grew up in Pontiac, Michigan, the eldest of the acclaimed Jones Family, which included trumpeter, composer and bandleader Thad Jones and drummer Elvin Jones.

Jones started playing in local bands in Michigan, Ohio and Buffalo before moving to New York City in 1943. His first job was with Hot Lips Page at the Onyx Club on 52nd Street where in 1945 he joined Billy Eckstine's big band. The following year he joined Coleman Hawkins and from 1947 to 1951 he toured the world with the Jazz at the Philharmonic (JATP) accompanying Ella Fitzgerald. In 1952 he joined Artie Shaw and then worked with Johnny Hodges followed by Tyree Glenn. In 1956 he joined Benny Goodman and the CBS studios as staff pianist in 1959, a position which would last for 17 years. Additionally, Jones accompanied Marilyn Monroe as she sang "Happy Birthday Mr. President" to John F. Kennedy at Madison Square Garden in 1962.

Although the thought of retirement had crossed his mind, at 87, Jones stayed busy playing concerts worldwide, recording and performing at jazz master classes at various schools, such as Harvard University and New York University.

Always the consummate professional, Hank Jones was one of the last surviving musicians from an era that helped forge this great musical genre called jazz. Throughout his career, Hank played and recorded with a virtual who's who of jazz history. With over five hundred albums and CDs recorded and countless concerts, there are not too many significant names in jazz that Hank did not play or record with. Most recently, he was involved in recordings and performances with the contemporaries such as Joe Lovano.

Jones released his most recent album, Pleased To Meet You, as a co-leader on Justin Time Records in October with label mate pianist Oliver Jones. Before his death, Jones recorded as a guest artist on a duets album with vocalist Hilary Kole, August 10 release on Justin Time. His final recording is an album of duets with bassist Charlie Haden, due out late this year on Universal France.

He was scheduled to appear at Birdland in New York next week and had performances booked through next year. 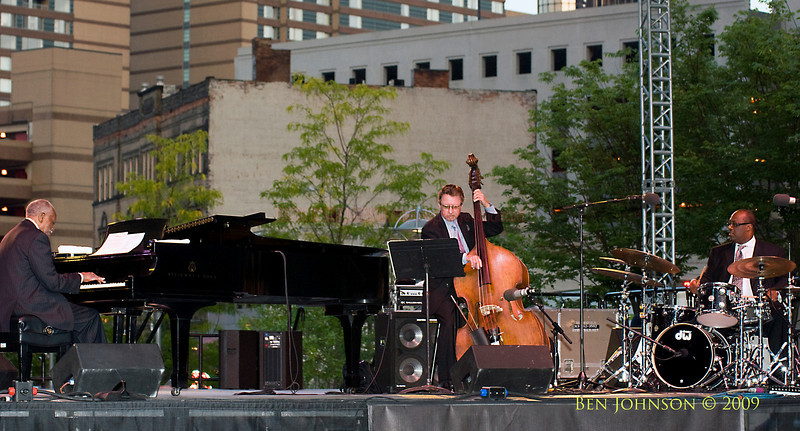